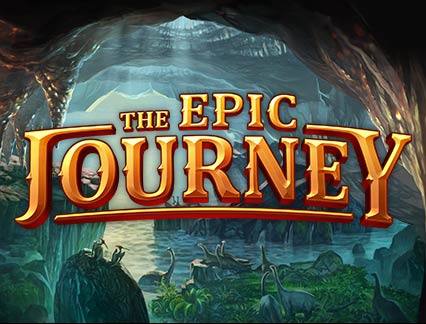 The Epic Journey low to medium volatility and an RTP higher than most at 96.54%. This video slot is quite visually stunning, as it features three boards of 5 reels each, where they all rotate simultaneously each time you hit the spin symbol.

The background is an epic landscape – as the name suggests – where we see prehistoric dinosaurs and animals.

The symbols of the game are related to archaeology, excavation, and ancient gemstones.

Other Slot symbols that pay

The gentleman with glasses and a lamp in his hand pay 0.15 to 1, equally, the youngest man with a tool on his back – surely for digging fossils – is equally worth 0.15 to 1. Then there’s the girl scout with the pink background who equally pays from 0.15 to 1.

When you get three Bonus symbols, the Pick Screen feature is triggered, which is a minigame in which you have to choose one of four stones so that you can access one of the next four bonus rounds of the main game.

Safari Free Spins: Safari’s free spin round is triggered when you get the Free Spin Bonus symbol, and give you 10 free spins. This bonus round has a special wild card for each of the three boards. By getting 3 of them, you multiply your wildcards. The multiplication of your winnings is paid on each of the paylines where the wildcard is present.

The Mammoth Wildcard appears in the lane of board number 1 and pays x2.

The Marine Creature Wildcard appears on the reels of the second board and pays x3.

The T-Rex Wildcard appears on the third board and pays x5.

All of these symbols can replace other symbols other than the Volcano’s Wildcard.

Fossil Hunter: You have three turns to collect as many symbols as possible. The symbols reveal the part of the fossils and block them during subsequent tours. At the end of the bonus round the prize is calculated based on the number of fossils you have earned in total.

Mushroom Forest: You have to catch the mushrooms to win. The first 3 collections are awarded. Some fungi reveal additional surprises and multiply much more.

Earn coins: As simple as that. One of the four rocks on the Pick Screen takes you to this bonus round in which an amount appears indicating the prize you just received.

It is a game with many visual elements which makes it a favorite of many for being attractive, entertaining, and varied. Players have multiple options to win thanks to the wide range of symbols and various bonuses it offers. It is, without a doubt, a game that offers an epic adventure in the best sense of the word.