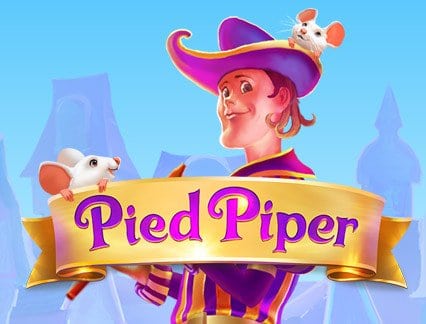 Pied Piper Slots- impressive RTP of 96.32% and a medium to high volatility. This video slot is inspired by an old German fable registered by the Brothers Grimm dated 1816. The story consists of a flutist who with his music managed to free the entire city of Hamelin from a plague caused by rats. His music attracted all the rats, which followed him to the River Weser, where they drowned.

The background of the game is a village (Hamelin surely), with typically German houses. In the center is the board with the graphics quite rich in detail and color.

The Flautist’s wild card. It is a symbol that spans 4 x 1 on a 5 x 4 board. This symbol triggers the Flautist’s bonus spins feature. For each spin, the wild symbol and any other Mouse Wildcard spooled on the reel will move to the reel on the left, expanding their reach and your winnings.

There is an opportunity to access a special bonus. At the end of the Flautist’s Spin, the flutist enters the game from the right reel to win five new spins.

3 Bonus Scatter symbols on the same spin will trigger 10 free spins. During this round of spins, 1 to 6 Mouse Wildcard symbols are guaranteed.

Another special feature of the game that you can enjoy is that of the Flautist symbol, when it mysteriously appears right after the free spin, as an additional form that allows you to trigger the Flautist’s Spin bonus.

The Flautist’s Wild card symbol can only appear in lane 3, 4, or 5, on both levels of the game, i.e. in the main game and in bonus rounds.

The Bonus Scatter symbol is the city, which activates the Free Spins round and appears on reels numbers 2, 3, and 4 only in the base game.

The other figures present in the game that pay are the king, queen, princess, key, bags, and gold coins, as well as the traditional letters A, K, Q, J, 10.

In any of the 40 paylines of this game, you can find the opportunity for your bets to be enchanted by the melody of your good luck.

Quickspin games are irresistible to gamers looking for essence and content in their games. If you click with legends and myths of general culture and literature, with these animations you will be crazy.